Vive LaFrance: Life as I know it

Don’t Tell Me it’s All in My Head, Doctor.

I’ve known — inherently known — that I have some autoimmune issues. Seems to be an underlying factor with acromegaly. You find a line here and there in articles with some research but nothing substantial. Doctors are not listening. Yet I’ve known for at least five years.

I’ve known the “lupus butterfly“ that appeared in 2014/2015 was not typical aging. Seems to be a favorite response to any symptom from the peanut gallery. For this case, will go with my husband. “You are getting older.” This will start an all out war which I ultimately win. I knew it was a sign of something more. Maybe not lupus… Right now at least… But something.

I know “diffused pain“ is a “garbage can diagnosis“ ….Pain that moves is not normal either.

Rib pain, spine pain, swollen bumpy things around my ribs… Not being able to get off of a hard surface… Don’t sit on the floor and stretch because you can’t get up, can’t get off of massage table, acupuncture table or an MRI bed — excruciating, I watering, cry out, can’t stop the pain, pain — doctors — got nothin’ …seems like they just act as though I didn’t say it at all.

… Five new doctors plus the staff that come in first and question you, all asked if I had any strange itching. I answered YES!! My lower legs. I was honest, I didn’t know if it was dry skin/shaving/winter weather related but come on — take a look! They just nod and move on. Not even a note taken?! How is it helpful to the patient? Why bother asking? And doctoring is NOT about writing prescriptions. It’s about a person and helping that person. An appointment is not a conversation — it is show and tell time — or really, tell and show time — I tell you I have lumps all around my ribs and you asked to see and touch. I say my legs itch so badly — you ask to see it. Because if they had, they would have found — no dry skin, no hives, no bumps or redness. The lack of any distressed skin is a clue — at the very least. How ‘bout start there.

The other thing I am always asked on “intake forms” have to do with quality of life and self-care. Can you do house-hold tasks? Ummm, sorta is not an option. Bathing is a question but not specifics. I can get in and out, soap up, shave my legs but… there is a but… washing my hair is hard. My arms don’t like that “up position” and blow drying your hair is also not an option. I can’t always hold a brush. This has lead to paying someone to wash and blow-dry my hair when I am headed out and need some help. Nothing like wasting all your energy showering and getting ready before you ever leave the house. Imagine if insurance took into account all we can’t do and paid for a blowout. That would be sweet! And if you’re thinking cut your hair short. Well, no. It took years to grow back after being destroyed by pituitary surgery and then 5 years later by radiation. Plus long hair you can pull up. Short hair… just nope.

So, January I was trying to settle in to our new apartment in New York, February the new insurance kicked in so March had lots and lots of appointments. April — kept going.

In early April I was scheduled for a biopsy. In March the new neurologist said “diffused pain, moving pain, sounds like you need to be tested for Small Fiber Neuropathy.” Come again? Why have I not heard this term before — the “small fiber” part?

It took three full weeks for the results to come in. Oh look, there’s something wrong. Ummmm, I told you so…. so we’re starting with Small Fiber Neuropathy, SFN. My numbers are ridiculously low. They literally count nerve fibers.

Thing is — it answers what seems to be, all of my unknowns. The crippling pain, the itch, the light, loving touch on my arm that makes me so agitated with my husband… Nerves!!! …or lack there of!

Why are doctors not required to do continuing education like a Pilates instructor. They have to in order to keep their certificate? How can something this serious not be required learning?

I know this test is new(er) but it’s only new because doctors finally took patient’s complaints seriously. Isn’t that the point in the first place… ya know, listening to patients? They did a controlled study of healthy people. They took biopsies from ankles and thighs to count nerve fibers and create a baseline.

Doctors listen to your patients! We are full of valuable information and at the very least we give you clues.

Why are there so few “curious“ doctors? What’s with the status quo? “Check list of diagnoses“ — if you don’t fit in the checklist — default answer “it’s all in your head/you’re depressed.“

I Expect Better. I Demand Better.

Acromegaly is still diagnosed “late“ …as in, not looked for early. Heck, just waiting for obvious signs like facial features and extremities to change has saved doctors a lot of time..? paperwork??  (still, under diagnosed and it’s right in front of their faces). So many of us, late diagnosis, means the hits keep coming — long after we’ve been treated. Even after surgery, after radiation, after years of injections (which work amazingly well but can kill your gallbladder in the most appalling way).

…Even in “remission“ other things have been long damaged. — You just didn’t know it because your body adapts until it’s worn out. It let’s you know in subtle ways until they’re not so subtle anymore. Then it’s, as if, warning lights are strobing and sirens that don’t stop are your bodies “little” way of telling you something is wrong. I know something wrong. Why do I have to convince doctors that something is wrong.

So, while I know with absolute certainty there is something wrong, I have to fight on. I have to keep trying new doctors — find someone who will listen….

Last week the neurologist had 15 tubes of blood drawn. Why? Because SFN (small fiber neuropathy“ can — wait for it — be caused by an autoimmune disease — and no, an ANA will not show evidence of all autoimmune diseases, if any. I’ve said that to so many doctors and yet here I am with one doctor who I didn’t have to ask. Who knew because she listened to what I said. Who knew because she is up on the lastest studies.

15 tubes of blood. Sent to three labs across the United States. These are not test run very often. Should they be? I don’t even know what batch of labs were done. Doctors are so use to complacent patients who don’t want to know what’s going on. When I ask everyone shrugs. I don’t have the energy. I’ll see the list and the answers when the labs come back.

I don’t know if it’s just low vitamin B or vitamin D… Yes they believe that this is a cause for SFN. I’m kind of doubting it but I’ll take my vitamins.

I fall in “normal range“ for several labs already completed this year, including vitamins B and D. When you fall into the low range of normal this often means “too low” for many people but doctors can ignore it. Not this doctor. She added the United States “normal values” are much lower than in Europe for vitamin D. Hhhmnnn… Keep us sick? Doctors are lazy? I don’t have an answer to this problem.

So while I fight on and wait three weeks for labs, I’ve had one vitamin B shot in the office and I’m giving myself three more vitamins B shots. One a week for the next three weeks.

What’s a little more waiting. A little more fighting on… I’ve only been doing this for 23 years.

I have been “sick“ for more than half my life and have surpassed the healthy years. This statistic will never change for me. But I can have a better quality of life. That is always my aim.

Time slips away. Very quickly as we get older.

If it means getting out 1 to 2 times a week and that’s my win, I’ll take it. But I will never stop fighting. 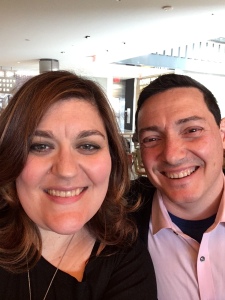 I still have much I want to do. The more I know about my health the better the treatment and that, in theory, should lead to better quality of life. I’m constantly revising. You never know what life will bring.

Keep going and keep track of any “symptoms“ — why quotation marks? Because sometimes you don’t know if it’s a symptom but if you notice it, write it down and tell every doctor. There are some amazing doctors out there and it’s exhausting trying to find them but it’s well worth it in the end. It is YOUR life on the line.

Love a good app? Download my link so HealthStorylines App can keep it all in one place for you!

I AM VIVE LAFRANCE

Kara LaFrance is a fine artist and graphic designer, returning to Rochester, NY having recently left the NYC area to be near family. She is also an acromegaly patient in "technical remission," with the addition of Small Fiber Neuropathy dx her chronic pain syndromes are all labeled "idiopathic." As an advocate, spreading awareness of this rare disease and chronic illness through her art, sharing her story and privately supporting all who seek her out the goal is purely quality of life.... for all.